Toe Angle and Calf Raises - The Muscle PhD
Welcome!Sign In
Sign In |   No items in cart.Visit Shop
Skip to content 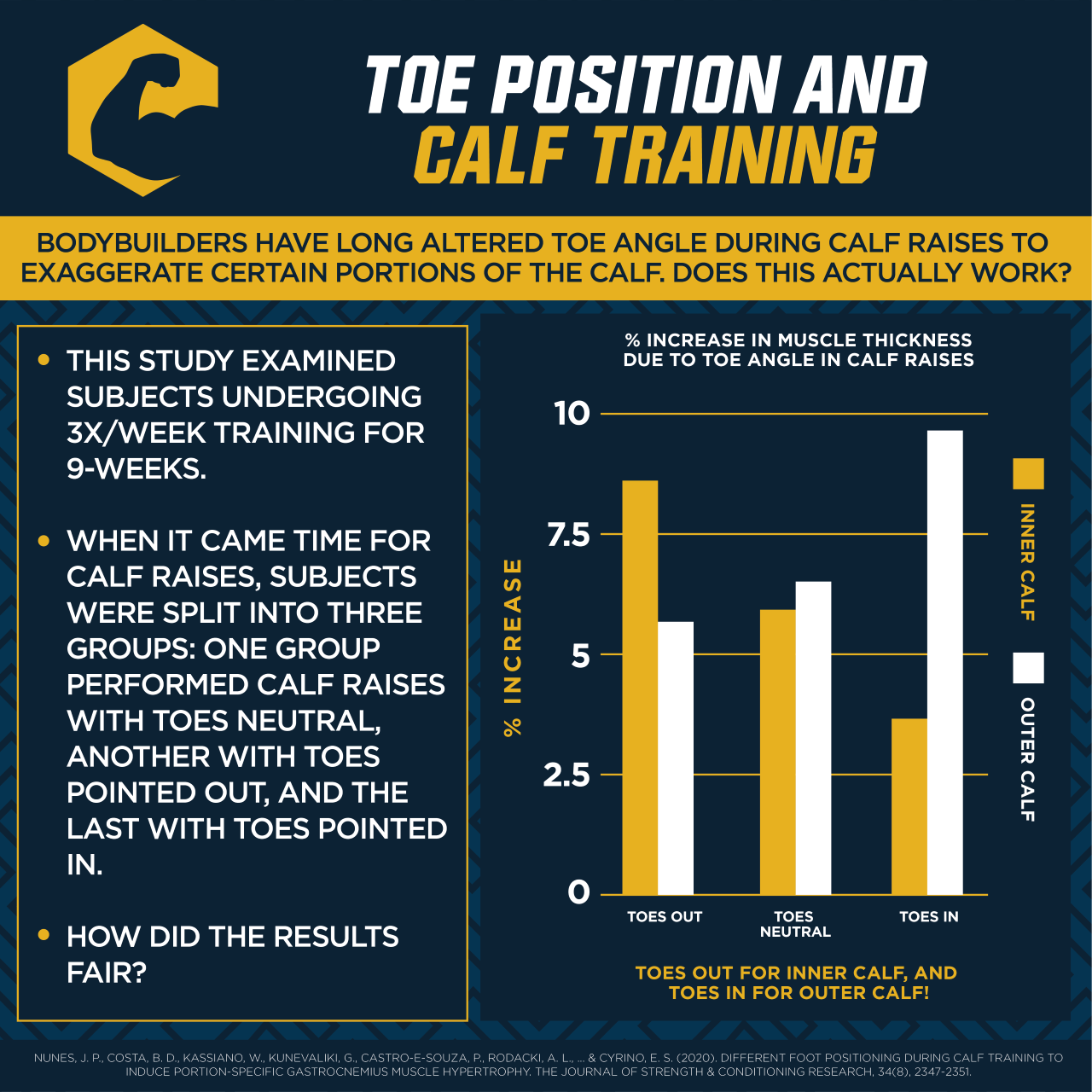 Calf training is a common frustration for most bodybuilders. To be frank, the calves aren’t really designed for growth; they’re mostly a slow twitch muscle (especially the soleus) and also get used constantly throughout each day. Therefore, the muscle fibers within the calves probably won’t grow as well from training due to being mostly slow twitch, and it’s hard to impose any sort of progressive overload on the calves when you already take 8-10,000 steps each day.

To this end, bodybuilders have long used different toe angles in their calf raise variations in an attempt to emphasize the inner or outer calves. It’s important to realize that the gastrocnemius is a bipennate muscle in that it has two heads – the medial and lateral head. Since the gastroc is closer to a 50-50 fast-slow twitch split, it’ll probably grow a little better from training, too. Regardless, the presence of two separate muscle heads in the gastroc means that slight changes in ankle loading can impose different mechanical challenges on the gastroc.

When we turn our toes out in a calf raise, we’ll also end up with some ankle pronation which can shift the direction of load on the gastroc. On the other hand, turning your toe in will probably load the outer half of the foot more which seems to shift the direction of load towards the lateral head of the gastroc. Bodybuilders probably “felt” this sensation when initially trying these variations, but we now have scientific evidence that these practices can actually emphasize one head of the gastroc over the other.

In the study shown on the infographic, subjects performed a strength training program that included calf raises. When calf raises were performed, subjects split into three groups; one group turned their toes out, one turned their toes in, and the last one kept their feet neutral. As you can see, the toes out group made the greatest gains in the inner calf (medial head) whereas the toes out group made the largest gains in the outer calf (lateral head). The neutral group made similar gains in both heads, but didn’t achieve the emphasis on either like the other two groups did.

With this new study in mind, be sure to vary your toe position on calf raises to keep your calves progressing. We also recommend checking out our Calf Training 101 article here where we go even further in depth on all things calves. This particular study was published after we completed that article, so these two posts should be good compliments of one another.