3 Reasons Why Your Biceps Aren't Growing - The Muscle PhD
Welcome!Sign In
Sign In |   No items in cart.Visit Shop
Skip to content

3 Reasons Why Your Biceps Aren’t Growing

Your biceps are probably the muscles you focus the most on while you’re in the weight room. They’re just there in the mirror! Which is why you might be frustrated that no matter how hard you train, increase the weight, the sets or reps, you’re just not seeing any noticeable growth in your biceps. 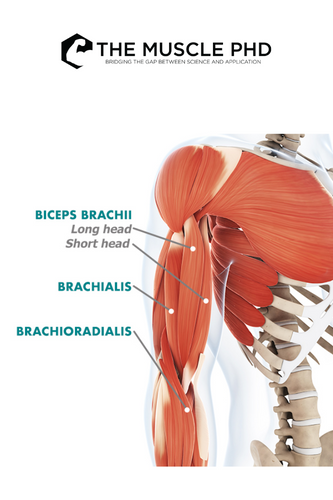 You’re not Training the Brachialis Muscle

The first reason why your biceps aren’t growing is probably because you spend all your time only exercising your biceps or triceps, neglecting the third muscle that’s wedged in between them. The Brachialis makes about 20-30% of your arm, and it’s lodged between your triceps and your biceps. The unique thing about your brachialis is that once you grow it, that’s going to push your bicep upwards, making it look bigger.

You’re only Training your Biceps with High Reps

A lot of people train their biceps by doing high-rep metabolic exercises for their biceps, we’re talking 8-12 rep or 12-15 rep ranges using things like cable curls. The thing is, your biceps are at least 60% fast twitch, meaning they can handle higher loads.

So, if you really want to grow your biceps, 6 out of 10 of your workouts should be training them heavy in a 6-10 rep range, which is going to be extremely effective for training the biceps. The best way to make them grow is to train them heavy at least 50 to 60% of the time.

Most people don’t realize that their biceps are supinators, which means that they turn your palm upwards. You actually need to use supination in order to maximize the bicep stimulation. If you’re just doing regular curls most of the time, make sure to start neutral, and twist your arm upwards, that’s actually going to take advantage of the supination aspect of the biceps.

Here’s a tip for the advanced bodybuilders reading this: You can purchase classic dumbbells that can be adjusted by putting plates on and off. Get these dumbbells for your home and weigh one side slightly more than the other. If you load a side more than the other, you’re going to resist it by using that supination factor of the biceps. You can try using exercises such as twisted bicep curls, and weighted slightly offset dumbbell curls.

We hope this article helped you understand the 3 reasons why your biceps aren’t growing, we’ll see you again in the next article!