Does the Protein Window of Opportunity Exist? - The Muscle PhD
Welcome!Sign In
Sign In |   No items in cart.Visit Shop
Skip to content

Does the Protein Window of Opportunity Exist?

The Muscle PhD - Videos - Does the Protein Window of Opportunity Exist?

You’ve probably heard of someone claiming that they never take pre-workout before going into the weight room. Maybe they claim that their pre-workout drink is their morning coffee, and that’s what gets them going. That someone might even be you! If so, we congratulate you on your mental fortitude. However, studies show that you’re actually not maximizing your gains, especially if you train in a fasted state!

Right now, the big trend is that everything that matters in your bodybuilding lifestyle is your calorie balance and your total protein intake, throwing nutrient timing out of the window. If you’ve been wondering whether you should take your protein before or after a workout, then this article was made for you!

First things first, is there really a protein window? Does your body react better or worse to protein depending on the time of day? And if so, how does it know?

That doesn’t mean you should only eat 20g of protein a day! Because once they took the same individuals, had them perform resistance training and then consume 20 or 40g of protein, their protein synthesis saw an increase between 20 and 40g. That’s because your muscles become more sensitive, and more of your protein intake can contribute to muscle growth! So, exercising actually extends your protein synthesis window!

However, your next question would probably be…

How Long Till the Window Closes? 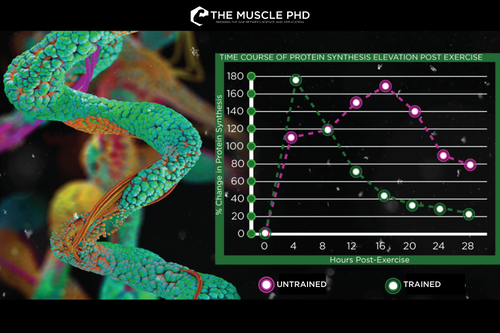 has shown that when individuals are not trained at all, their protein synthesis can last anywhere between 30 to 72 hours. That’s one reason why, during your early bodybuilding stages, you found it so easy to grow! However, studies suggest that trained individuals’ protein synthesis rates go back down to baseline after only 12 hours, and only last anywhere from 4-8 hours after they workout.

However, in our “How do you Read Research Studies?” video, we explained how sometimes studies can be a bit out of touch with the bodybuilding industry. Because once you take a look at who researchers consider as “trained”, you’d find that they’ve only been training for 12-16 weeks. Even people who’ve been lifting weights for a few months wouldn’t be considered trained in the bodybuilding world.

So, if you’re an advanced bodybuilder, probably training for years or even over a decade, that means you might not even be stimulating protein synthesis at an elevated rate for more than 4 hours after you train.

When Should You Take Your Protein?

Assuming you’re adequately trained, are there studies that support protein having a timing effect? Definitely. Studies that looked at muscle and fat mass compared taking protein before or after your workout, versus delaying it to early in the morning or later in the day. They showed that bodybuilders who took protein before and after their workouts made way more gains in muscle, and lost more fat while getting stronger.

However, a similar study was conducted without a high quality protein (collagen, in this case), and it showed that the athletes did not make any different gains than usual. So it’s important to take into account having a quality protein before and after your workouts in order to grow.

If your 20s are behind you then we recommend that you absolutely time your protein intake! Studies show that as you get older, and you don’t have any protein after your workouts, you’ll probably not grow at all. The older you get, the more timing becomes important. If you’re a master bodybuilder that’s been training for a long time, you should listen to your body and time your proteins.

We recommend having a preworkout with an immediate or fast digesting protein source, and after training you should take advantage of that protein synthesis window by taking your quality proteins. We hope this article helped alleviate your concerns on protein timing! We’ll see you next time you have any questions.