Ketogenic Diet and Thyroid Hormone - The Muscle PhD
Welcome!Sign In
Sign In |   No items in cart.Visit Shop
Skip to content

However, there are also many athletes who have their own problems with the diet, for multiple reasons. They might’ve heard that they might not be able to make gains on a ketogenic diet – which we’ve already debunked. Or they might be hearing how terrible the keto adaptation phase is. Since ketosis is the state where your body is primarily using fat as fuel, it’s possible to feel tired, weak, and grumpy during your first week of adaptation.

However, you might’ve heard of a rumor floating around about the negative effects of a ketogenic diet on your thyroid hormone. A huge fear of people is being unable to control their metabolism, and a lot of times, thyroid issues are a cause of that. So, it’s understandable that people would be hesitant to undergo a ketogenic diet due to some rumors circulating around the theory that it might lower thyroid levels.

If you’re hesitant on adopting a ketogenic diet because of some rumors floating around, then you’ve come to the right place. And you’re here because you want to know: does a ketogenic diet affect thyroid hormone? Worse still, does it make it plummet? You’re about to find out!

But first, thyroid hormone – what is it? 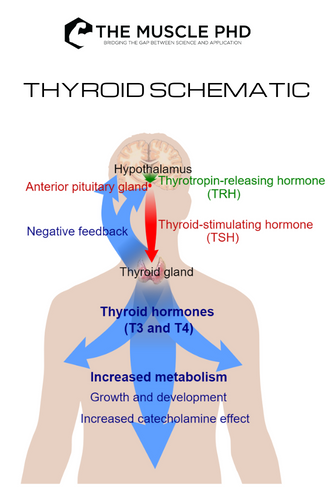 The thyroid gland, which is in your neck, produces thyroid hormone. More specifically, it produces T4 Thyroxine, which gets converted into T3 Triiodothyronine. T3 is actually what most people think about when they’re referencing what the hormone does to our bodies, as it stimulates our metabolism. Additionally, it also makes us more responsive to other hormones such as adrenaline.

When you measure blood hormones, you notice a hormone receptor interaction where the hormone binds to a receptor and is then added to the blood. Note, though, that this measurement only tells us how much of a hormone we have – not how well the target tissue receives the hormone. So, why would going on a ketogenic diet affect your thyroid hormone?

A ketogenic diet will likely raise your metabolism. Even in a worst case scenario, it won’t lower it more than a regular carb diet. And if your thyroid hormone does lower, but your metabolism either goes up or stays the same, that actually means your muscles are becoming more sensitive to thyroid hormone!

So, you shouldn’t actually worry about a ketogenic diet lowering your thyroid hormone, as it can actually make you more sensitive to it instead.

So while it’s easy to blame your diet, your workouts, or anything in between for having a negative effect on your thyroid hormone, the biggest culprit to lowering your thyroid hormone would be your caloric restriction. We recommend checking out our Calorie Cycling video in order to circumvent this problem!

If you’re looking for the TL;DR version of your answer, then here are some facts that’ll help you get to your answer in as little time as possible.

We’ll see you the next time you’re interested in learning more about your body.