Front and Backloading Strategies - The Muscle PhD
Welcome!Sign In
Sign In |   No items in cart.Visit Shop
Skip to content

Just about done with your contest prep? You might be wondering about what to do in your last week prior to your contest. How can you perfectly prepare for it? Well, ideally you’d want to suck as much water from your muscle as you can, getting that much desired paper thin skin where your muscles have all the room to essentially push up against your skin with veins popping all over the place. You want everyone to look at you and see how much hard work you’ve done, dialing in your diet, with everything on point and your body looking shredded.

The backloading strategy actually goes back to the 80s, where researchers were experimenting on endurance athletes to increase their performance. What these researchers did is that they got a group of endurance athletes, and they almost completely depleted their carbohydrate reserves. And then they had them do a lot of cardio while giving them almost no carbs for around 3 days.

The twist in this study comes after the aforementioned 3 days of depletion. After the first three days they actually overloaded their bodies on carbs, sometimes giving up to 800 grams of carbs per day. They then followed this refeeding strategy for 3 days. So, after their bodies were almost completely depleted of carbs, they suddenly found an overload of carbs entering their system.

What they found out is that the body tends to super compensate when it realizes that its normal carbohydrate loads on the muscle are depleted, so when they overload on carbs they actually reach carbohydrate levels in their muscles higher than before. Keep in mind that for every gram of carbs stored in your muscle, your body stores around 3-4 grams of water. 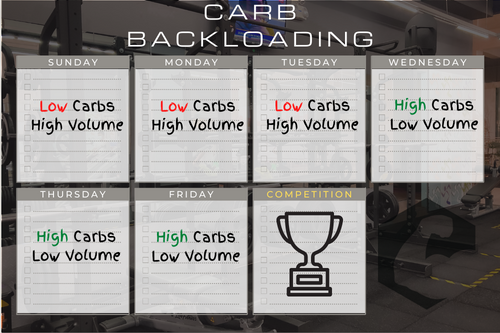 While this research was conducted to look at performance on endurance athletes, bodybuilders actually don’t care too much about endurance performance. If you’re just about to enter a contest, you’d want to look shredded and get on stage while having those veins pop!

So the backloading strategy boils down to depleting your body of its carbs for around 3 days, doing really high reps workouts with less weight. Basically, you’re doing your absolute best to deplete your muscles of energy!  Keep in mind, though, that doing too much weight or novel exercises during this period might actually promote too much muscle damage. If your muscles are too sore and damaged, they might not be able to store carbs as well during your refeed period.

Following that, you super compensate with carbs while dropping all the water in the cell. However, this strategy doesn’t always work.

Sometimes you could end up accidentally doing muscle damaging exercises, which cause you to be insulin resistant, and if you’re insulin resistant when your carbs are low, that’s a recipe for disaster. What ends up happening is that your carbohydrates will spill over. Simply, they’ll get stored as fat. Once your body realizes that it can’t handle that many carbohydrates in its system, you end up raising your blood glucose and storing a lot of water in your body.

Eventually you end up gaining a thin layer of fat, not a good look during a contest! There are multiple reasons why your body can spill over. As mentioned before, you might’ve been doing a lot of muscle damaging exercises, causing you to be insulin resistant. So your body ends up storing carbs as fat.

Another reason is that insulin itself can make us hold water. It causes us to not excrete sodium, which is an extracellular substance outside of the muscle. Perhaps you’ve overlooked your sodium intake and had too much sodium in your final days before the competition. Now you’ve carried extra water on the stage, looking soft and unprepared.

Another reason is related to lifestyle, a lot of people who finish their contests tend to eat poor diets in the off season, so they develop insulin resistance and gain a thin layer of fluid around their muscle. Even if they stay lean during the off season, they’re not as insulin sensitive in their muscles.

Solving the Issue of Spilling Over

However, perhaps you’re not so pumped up with the risks that come with the backloading strategy? Well, there’s a more conservative approach just for you. 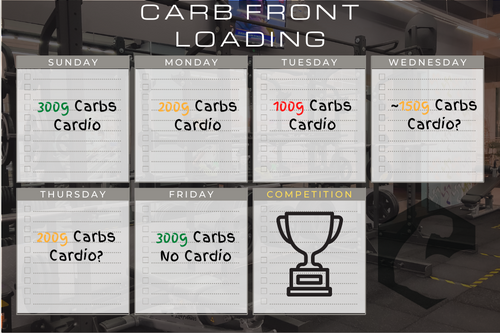 Say you’ve got a week left till your contest… You could start off your week with around 300g of carbs on the first day of the week, lowering it down to 200g on the second day, and only have 100g of carbs on the third day… On the fourth day, if you’re feeling only a little bit depleted, but not super depleted of carbs, take a look at how your body looks. If it’s full, you could try upping your carbs to 150g. On the fifth day, depending on your state, you could do 150g to 200g of carbs to see how you fill out. If you’re super flat on your fourth day, try bumping up to 200g of carbs, and on your 5th day you can maintain your consumption if you’re satisfied with your body.

This might not be as effective as someone doing a backloading strategy, however you’ll have less of a risk of spilling over! This is where you can weigh your benefit to reward ratio.

When doing the backloading approach, make sure that you’re doing really high reps that aren’t muscle damaging, and load up on carbs during your final days before the contest. However you might risk spilling over, so you’ll need to practice this method during the off season. If the risks aren’t to your liking, you could try the front loading approach.

We hope you enjoyed learning all about your pre contest strategies to getting shredded and staying at the top of your physique! We’ll see you next time you have any questions