What can we Learn from CrossFit? - The Muscle PhD
Welcome!Sign In
Sign In |   No items in cart.Visit Shop
Skip to content

What can we Learn from CrossFit?

The Muscle PhD - Videos - What can we Learn from CrossFit?

Taking the world by storm, CrossFit is carving itself a massive piece of the fitness pie, converting more and more people into trying it out and even bringing in some new blood to the fitness industry. However, CrossFit doesn’t just promote extreme workouts, it also seems to cause people to have even more extreme opinions on it! Even the National Strength and Conditioning Association (NSCA) attacked CrossFit because they believed the movement patterns that CrossFit suggests would cause injury under a high enough volume.

But that didn’t stop diehard fans and even CrossFit from punching back with a lawsuit that only ended recently in 2021! Love it or hate it, nobody can deny that CrossFit as a culture is growing every day. And as it increases, you find it being more and more of a societal norm. Additionally, no one can deny that high level CrossFit athletes not only look lean, but they’re also jacked, shredded, and vascular.

We know that bodybuilders have an eye for this. It’s clear that at some level, the CrossFit methodology works!  If you’re here to find a few nuggets of information about what we can learn from CrossFit, then read further!

The number one thing you should look at when you’re trying to understand how shredded someone can get is to take a look at their workout structure – there’s always something you can learn. Take a normal CrossFit workout for example, they have a new challenge every single day they enter the gym. They probably don’t even know what awaits them. They go in, they look at the board, they do what the board tells them to.

It’s in line with the principle of accommodation, if you’re always facing new challenges, your body has to adapt to keep up. And conversely, once you get used to doing the same thing every day, you’ll stop growing from it. This is a trap many bodybuilders fall into. So one thing we’ll give a CrossFitter over a bodybuilder is the variation in their daily exercises – unlike your average gym goer who would go in and do the same reps and sets. 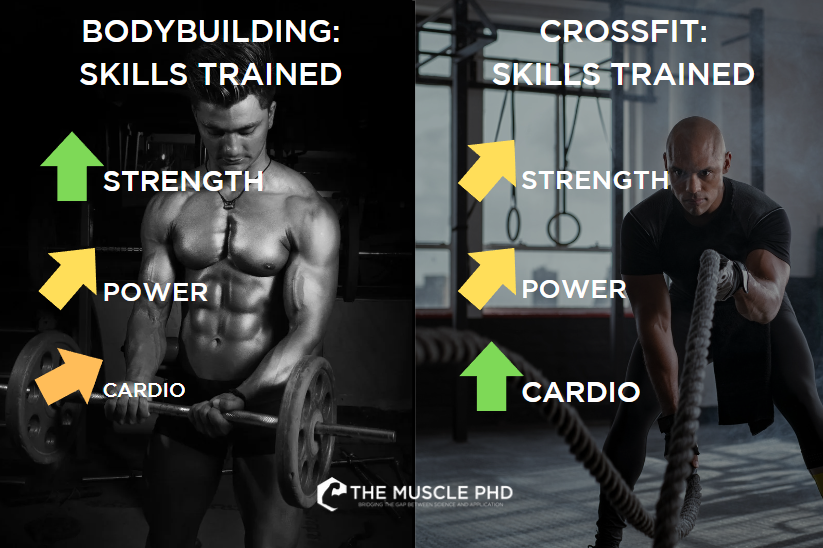 When looking at their daily workouts, they might seem all over the place, however there’s definitely a pattern going on there. They might start with doing maximal lifts, like doing sets of 5. That’s an extremely heavy lift!  Following that, they might do a set of circuits while performing as many reps as they can. Since their goals and exercises are changing every day, they don’t mind going the distance with each exercise!

In fact, when my research team and I measured the blood of CrossFitters during those circuits, we found that their blood lactate levels were literally sitting at four times the threshold! While the typical lactate threshold is around 4 mmol/L, they might sometimes see 15-16 mmol of lactate. So, they make it a habit of keeping their bodies moving even when it’s hard to even breathe.

Of course, studies show that when we expose muscle cells to lactate in an isolated lab, the muscle cells grow. So, they’re essentially bathing in this anabolic acid and constantly growing.

CrossFitters’ cardiovascular conditioning is insane, but why is that? What’s making them able to go the distance? It’s because they focus on types of resistance cardio called giant sets, supersets, and circuits. In essence, it’s interval type training. We know that sprinters are some of the leanest athletes in the world, but why’s that?

Our studies have shown that the higher the intensity of cardio, the more shredded you become and the less muscle you actually lose during a cut. There’s a reason professional CrossFitters look this shredded, it’s because they’re used to combining this metabolic training. Moreover, they lift heavy to boot – not to mention that they’re switching it up every single day.

Applying this to Your Workouts

CrossFitter or not, using those principles is going to help get you shredded, lean, huge, and vascular. We recommend studying what they do during their daily workouts, and possibly applying some of the principals you come across to your training. You just might find yourself growing from it!