Muscle Science: A History - The Muscle PhD
Welcome!Sign In
Sign In |   No items in cart.Visit Shop
Skip to content 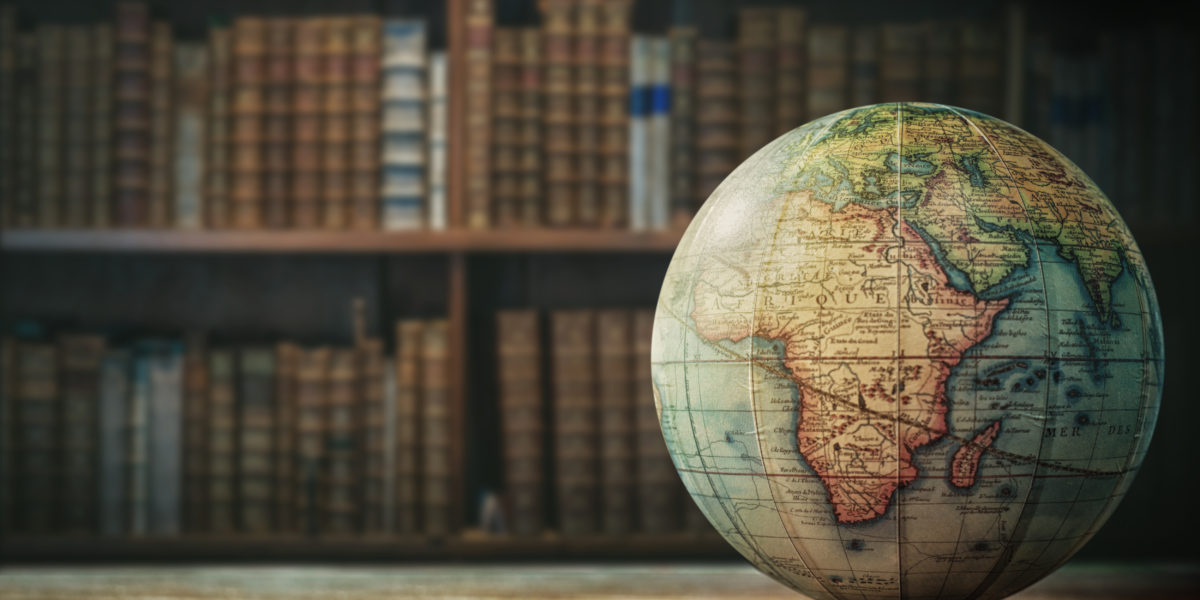 Today we’re going to cover some incredibly complex topics that may answer a ton of questions you didn’t know you had about the science of muscle. By the end of this, you’ll truly understand why the first rep of a deadlift set is harder than the others and why full range of motion training is so important for optimal gains.

To appreciate the science behind these phenomena we have to take a trip down history lane and touch on the major developments that helped construct our current understanding of how a muscle contracts and produces force. 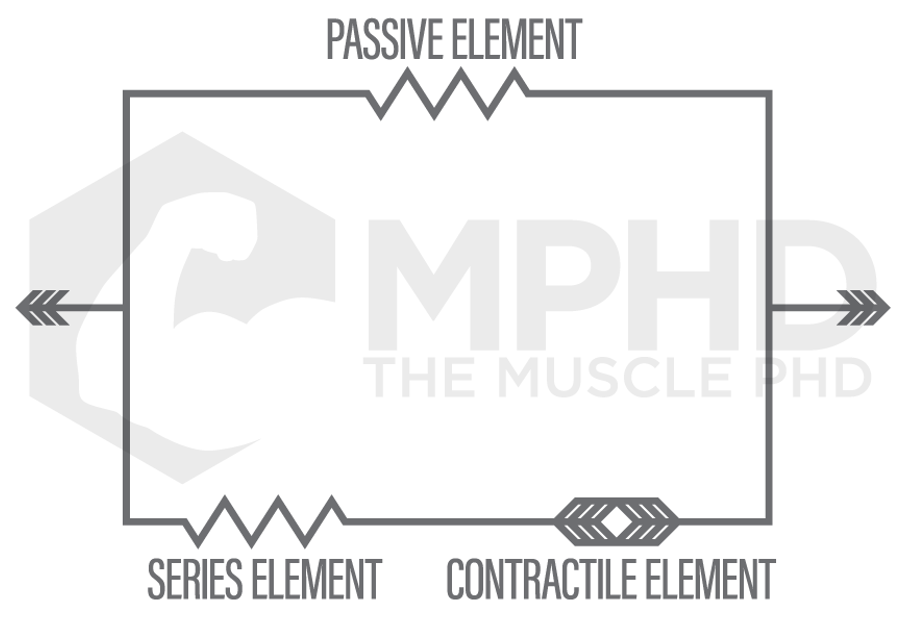 The first breakthrough in muscle contraction research was the development of the Hill Muscle Model in 1938. The Hill Model was somewhat able to explain what perplexed scientists the most at the time: a muscle can produce more force while lengthening than it can while shortening. The Hill Muscle Model proposed that passive elements in the muscle worked in tandem with active elements, like the contractile proteins and series elements (tendons and connective tissue), to produce more force while lengthening (14). This also somewhat explained how a muscle can produce more force after an eccentric, or lengthening, action as the passive elements may have some elastic component (14).

The Hill Model offered a decent explanation as to why the muscle could produce more force eccentrically, but we still didn’t know how exactly a muscle contracted. In 1954, Andrew and Hugh Huxley published papers stating that muscles contract according to the, “Sliding Filament Theory” (17,18). This theory stated that there were two contractile proteins, myosin and actin, and that these proteins slide past one another to shorten or lengthen a muscle fiber. Three years later, Andrew Huxley formulated the, “cross-bridge theory,” to describe how exactly actin and myosin slide past one another. This theory states that myosin has, “heads,” that attach to actin and pull it closer to the center (M-line) of the sarcomere, or contractile unit, of a muscle fiber (15). This theory adequately described both shortening, or concentric actions, and isometric actions like flexing your biceps. However, it did not provide enough insight as to how eccentric actions produce more force, which Huxley himself admitted in a later book (16). 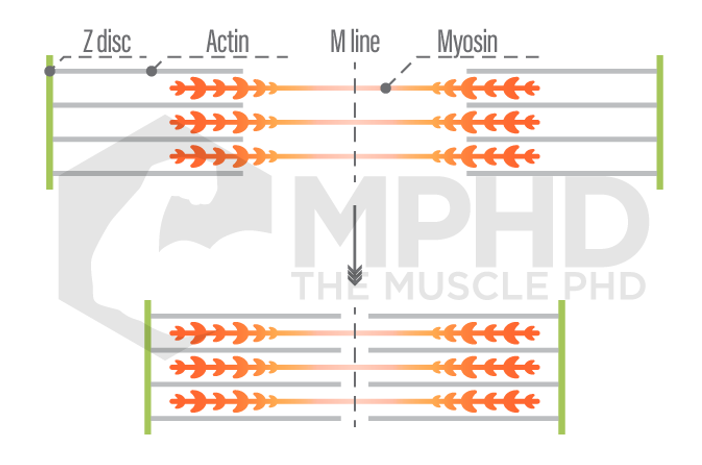 The sliding filament theory and cross-bridge theory are still both heavily taught and referenced to this day when concerning muscle contraction. However, it was often noted that they did not adequately describe the phenomenon of increased force during eccentrics and increased force following eccentric actions (32). The increase in force following an eccentric action is known as, “residual force enhancement (RFE),” and the cross-bridge theory lacks an explanation as to why this would happen. Andrew Huxley states that myosin heads attach to actin at the, “x-position,” which indicates a neutral position in which no force is being produced. Therefore, when you perform an action where a concentric action is preceded by an eccentric action, like in a squat, the concentric force would not be influenced by the previous eccentric action (7,15). Several studies found that this was not the case (5) but still could not offer an explanation as to why.

The next major development towards residual force enhancement was the idea of “sarcomere non-uniformity.” We know the sarcomere is the contractile unit of a muscle fiber; several sarcomeres in a row comprise a full fiber. Some studies suggested that RFE was induced by the fact that some sarcomeres are longer than others. This would mean that some sarcomeres are producing more or less force than others while the muscle changes length, and at extreme muscle lengths, some could produce more force than we thought was possible (27). While sarcomere non-uniformity is quite common, it is not responsible for all of RFE – it may contribute up to 10% or so (31). Furthermore, studies have found RFE to be exhibited by single sarcomeres which completely debunks the theory (24). Other studies have found that sarcomere non-uniformity also contributes to force enhancements in both isometric and concentric actions which no longer renders it a special aspect of eccentric actions and would not explain RFE (19).

Later studies began to confirm that there may be passive components that contribute to eccentric force production like the Hill Model proposed. These passive components can be independent of muscle contraction, so studies that tested muscle fibers that were unable to actively contract were still producing some residual force enhancements (20,23). Scientists knew that sarcomere non-uniformity was not the answer (11), but they didn’t have a great alternative explanation. 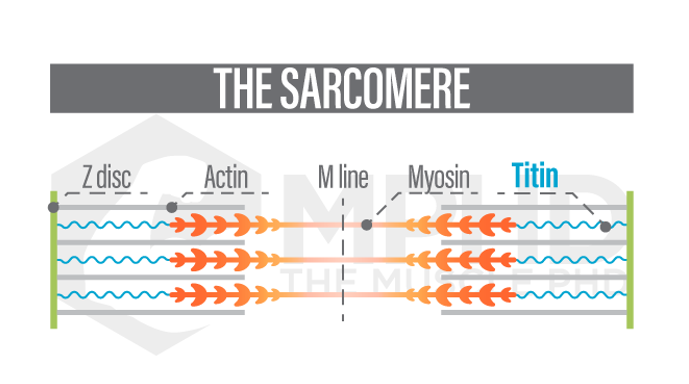 Enter the role of titin. Titin is a third protein that is found in sarcomeres and was originally thought to not play a significant part in muscle contraction. We now know this is not the case. Titin is best described as a spring – it originates at the end of the sarcomere at the Z-disc and attaches to a myosin filament (21). As the sarcomere lengthens, like in an eccentric action, titin starts to wind itself around actin and stretches as the Z-discs move further away from the M-line (29,30). This is known as the, “winding filament theory,” and may just explain everything that was perplexing scientists over the past 70-years.

Studies have shown that titin can play both an active and passive role in muscle contractions (4,12,13,20,22,26). This means that titin can represent both a contractile element and a passive element when it comes to the Hill Muscle Model. Calcium binds to contractile proteins to stimulate muscle contractions and it appears that calcium also binds to titin which increases its stiffness and ability to produce force as the sarcomere lengthens. (4,20,22). In addition, the winding action of titin around actin creates stored elastic energy that turns into kinetic energy when the muscle begins to shorten – this is why you can produce more concentric force following an eccentric action (7,21). This is what makes the first rep of a deadlift set harder than the others; the first rep contains no eccentric motion beforehand, so there’s no storage of elastic energy due to titin before your first rep.

We also see this occur in the case of residual force depression. RFD occurs when you perform an isometric action following a concentric action – you can do this by pausing a squat midway through the positive portion. Since titin has already released its stored energy and is unwinding from actin, we see force production actually drop following the isometric pause (7,12). If you want to perform isometric holds in your training, you’re best off eccentrically lowering into the hold instead of pausing during the concentric phase – you’ll be able to use more weight this way and will get a better training effect. 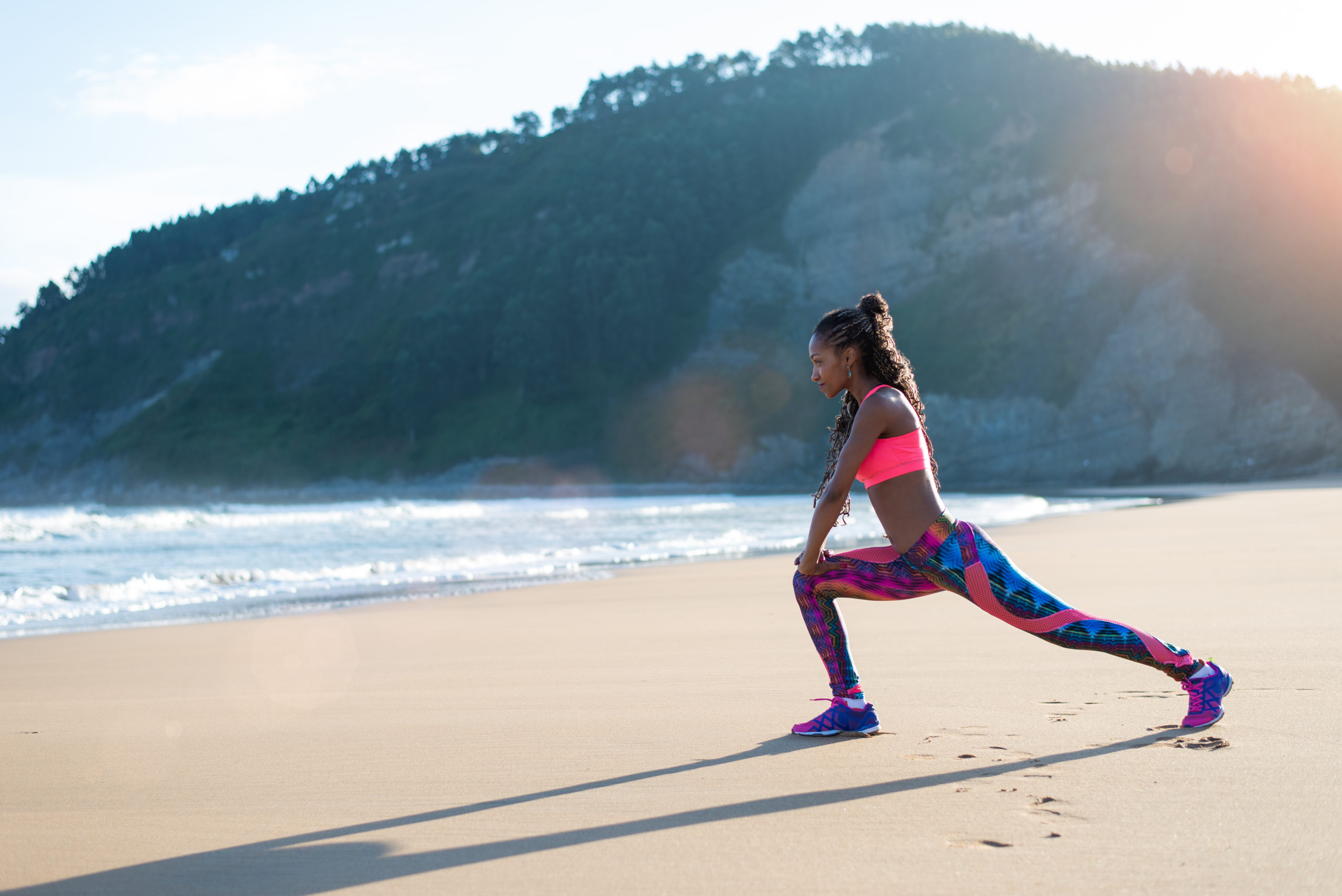 So what else does the mean for training? Studies have shown that RFE is not dependent on the velocity of the eccentric, so the speed of the eccentric will not change the amount of elastic energy stored by titin (5). However, anecdotal experience shows that performing lifts with a fast eccentric usually makes the concentric portion easier, right? This doesn’t have appear to have anything to do with RFE, it actually increases the force production and elasticity of the muscle tendon which represents the series component of the Hill Muscle Model. Studies show that tendons produce more force at higher velocities and undergo more length change than muscle fibers during high velocity movements like jumps (6). Fast eccentrics making lifts easier also adheres to some of Newton’s Laws but that’s beyond the scope of this article.

How can you influence RFE, and ultimately, titin’s role in contraction? RFE appears to be depended on the length of the muscle (9); this means that the more range of motion performed during the eccentric, the more RFE you’re going to produce. As if you needed another reason to squat below parallel, here it is: squatting past parallel will put the muscles of the lower body through a large length change which will optimize RFE and may improve the function and performance of titin. This larger range of motion can also have major implications for hypertrophy, check out our Biomechanics and Growth article here for more info on that.

We’ve covered the role of velocity and range of motion and how they can affect tendons and RFE’s, respectively. What does this mean, overall, for training? I’d consider both RFE and tendon force production to contribute to the, “stretch reflex,” of the muscle. This is easiest to imagine by considering a rubber band – as you stretch and release the rubber band, it will reflex back to original length. Our muscles and connective tissues exhibit a similar property and I think titin plays a very large role in that. Optimizing the function, force, and power of the stretch reflex is a large component of strength training and performance.

I do believe that we can separate the stretch reflex into two parts – muscles and tendons. The muscle needs to be trained through a full range of motion to optimize titin development and elasticity while the tendon needs to be trained at high speeds to maximize elastic energy storage. If strength or athletic performance are some of your training goals, you need to utilize both full range of motion movements and things like plyometrics to fully develop both components of the stretch reflex. 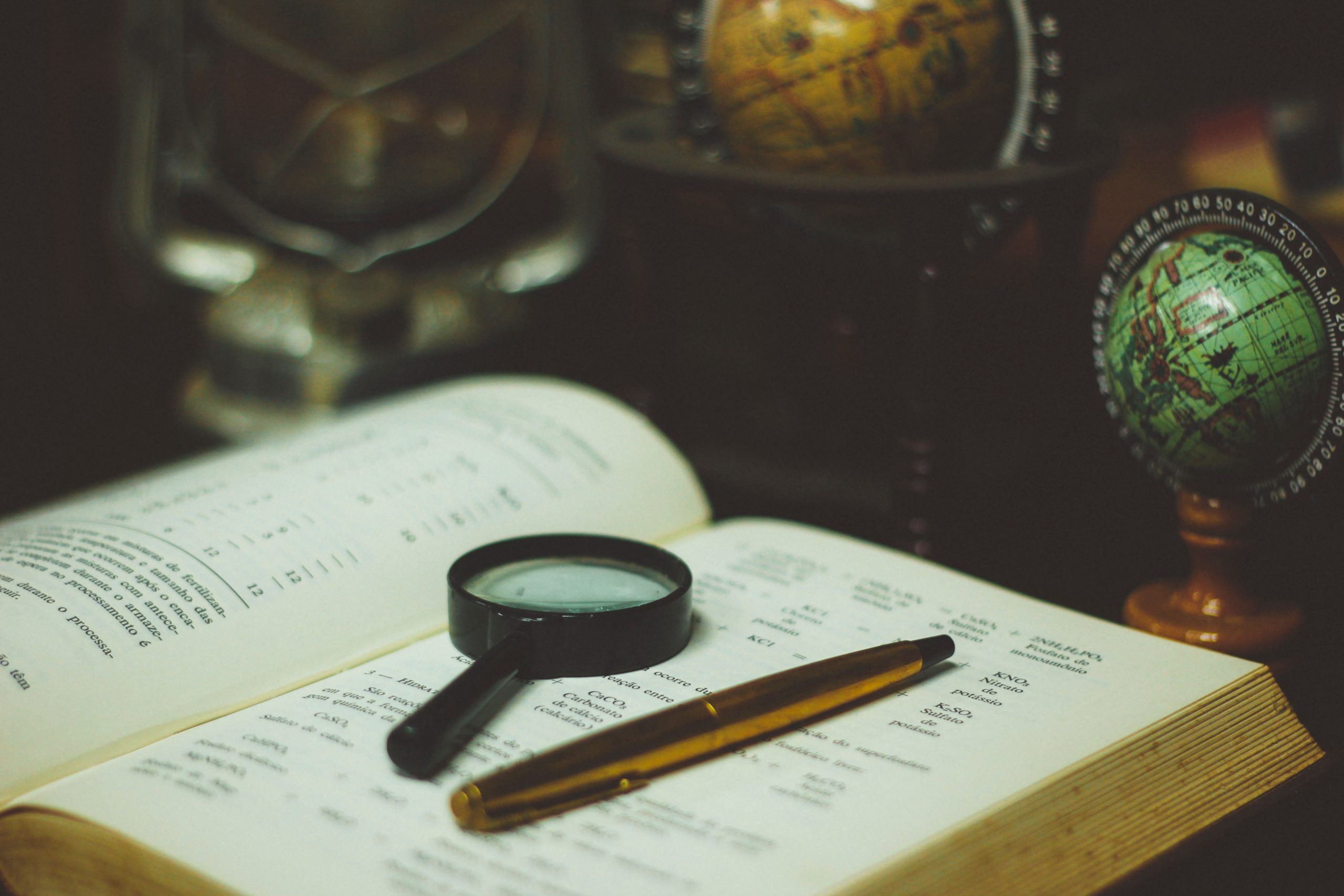 So what’s the takeaway here? First, understand that the exercise sciences are always evolving. That doesn’t always mean that outdated information is wrong, we’ve probably just expanded further on the ideas and theories. Realistically, the Hill Muscle Model from 1938 is not far off from our understanding in 2019. We just know why the muscle acts like it does now. Secondly, muscle sciences have huge implications for training and performance and it’s imperative to always stay on top of them, especially if you’re a competitor, coach, or trainer. Lastly, don’t be afraid to experiment with new knowledge. Titin and RFE have so many implications for training that you simply have to start hypothesizing and experimenting to see how your performance responds.

If you’re interested in an even more detailed look at RFE and RFD, check out these articles by Dr. Chris Beardsley here and here.

Note: Many of the older references used in this piece are no longer available as abstract or full text links. If we come across updated versions in the future, we’ll be sure to update the links in this article.