The Courtroom of Gains - The Muscle PhD
Welcome!Sign In
Sign In |   No items in cart.Visit Shop
Skip to content

The Courtroom of Gains

The Muscle PhD - The Courtroom of Gains 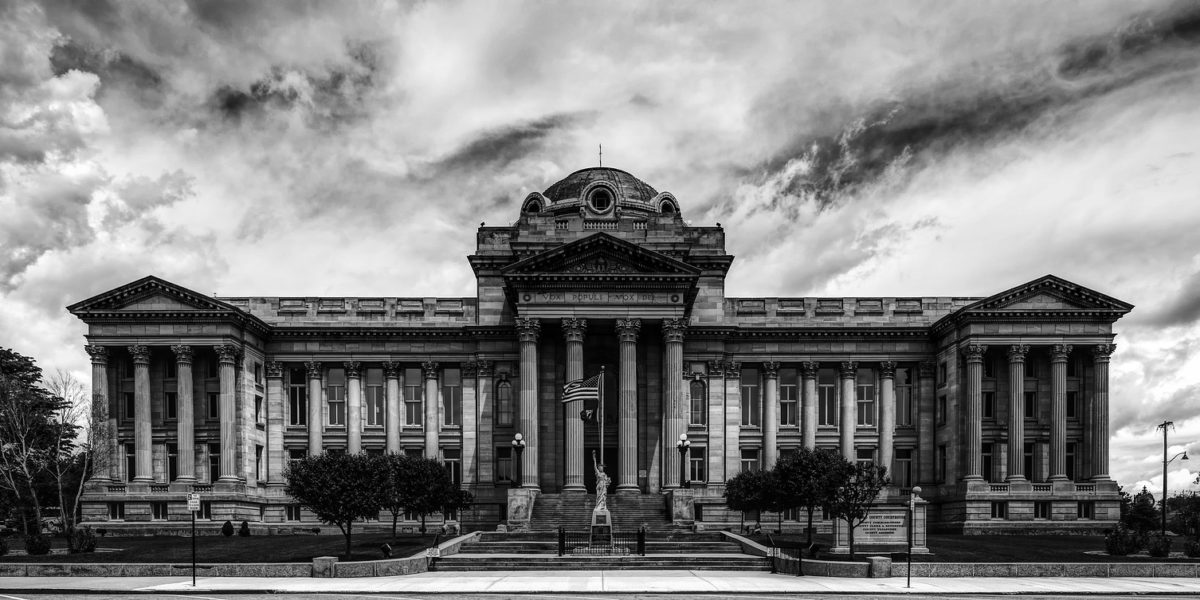 In the criminal justice system, weightroom-based offenses are considered especially heinous. In Tampa, FL, the dedicated detectives who investigate these vicious felonies are members of an elite squad known as the Swole Victims Unit. This is the story of Joe Obtuse, who has been charged with repeatedly quarter squatting despite prior warnings from gym officers. 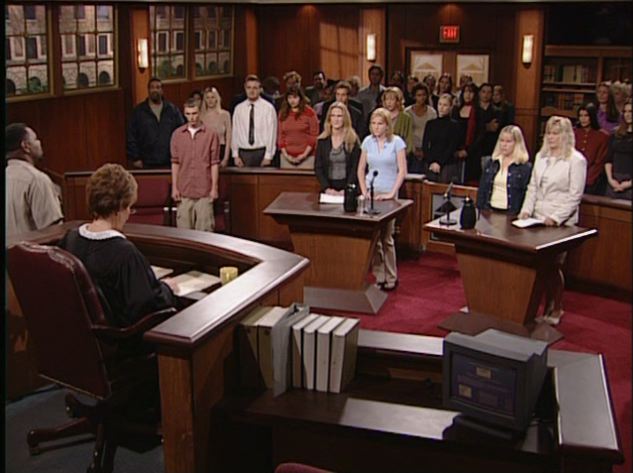 The courtroom murmurs with excitement as the audience settles into their chairs. Attorneys lean into their clients’ or partners’ ears and whisper nonsense to make it look like they’re busy. All of a sudden, a hush falls over the crowd as the bailiff announces the arrival of the honorable judge. All rise as the judge saunters into the room and settles at his bench.

Judge: “We are here today to witness the trial of Common Sense v. Mr. Joe Obtuse. The jury for this trial has been pre-selected as this is a high-profile case and must be treated with dignity.”

As the judge announces this shocking revelation to the audience, the jury slowly enters from the corner of the room. Among them, John Meadows, CC Ingram, Dave Tate, Stefanie Cohen, Dan Green, and Tom Platz. A trial on squatting requires a jury of peers, thus the pre-selection of known professionals.

The lead prosecutor in this particular trial was none other than National Strength and Conditioning Association President, Dr. N. Travis Triplett.

Dr. Triplett: “Thank you, your honor, and good morning jurors. What we are facing today is an afront to proper strength training protocol. The benefits of squatting below parallel are well-known and can influence joint health, muscular development, athletic performance, and quality of life. The defendant, Mr. Joe Obtuse, has been charged with reckless disregard of this knowledge, and has repeatedly performed quarter squats despite the overwhelming evidence against them. Mr. Obtuse has previously received warnings for these infractions, but his neglect of these warnings has warranted lawful intervention.”

Judge: “Thank you, Dr. Triplett. May the defendant please rise and present his opening statement?”

Joe rose to his feet. Unfortunately, he could not secure the services of a criminal defense attorney as no reputable attorney would take his case. Therefore, Joe was left defending himself.

Joe: “Thank you, judge. What I have been charged with is easily dismissible in court and will be proven today. We have scientific evidence to support the use of reduced range of motion exercises and this evidence will be presented in due time. Also, I challenge the prosecution to define, ‘quarter squat,’ and I also suspect a lack of indisputable video evidence for these charges. If neither step can be appropriately taken, the jury must acquit. Thank you.”

Judge: “Dr. Triplett, you may now have your witness approach the stand.”

The witness approaches the stand. A court officer holds out The Encyclopedia of Modern Bodybuilding by Arnold Schwarzenegger and the witness takes his oath. As the witness takes the stand, the audience finally gets a better look at the short, but thick man. It was none other than Louie Simmons. The audience gasps. The case is over before it even begins. 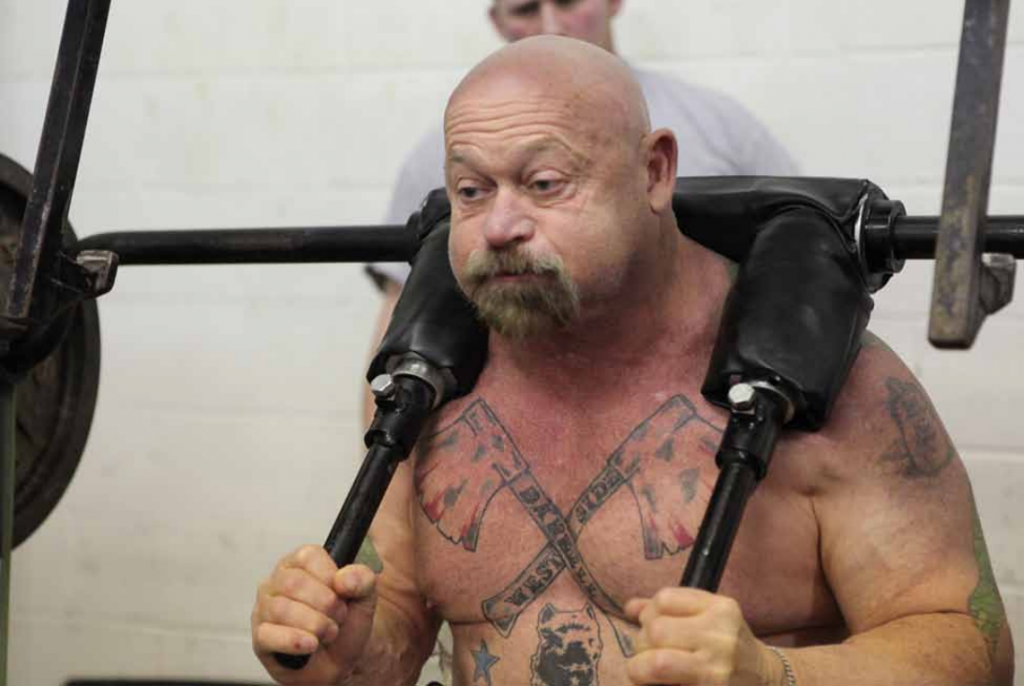 Dr. Triplett: “Mr. Simmons, thank you for your assistance today. You are here to serve as a witness in this case as your expertise may help us secure a conviction.”

Dr. Triplett: “Now, Mr. Simmons. Can you explain your whereabouts on the night the charges against Mr. Obtuse were incurred?”

Louie Simmons: [Ignoring the question] “The conjugate training system was originally developed by the Russians in an attempt to train multiple skills at once.”

Louie then starts stacking textbooks on the stand.

Dr. Triplett cuts Louie Simmons off. While Louie is a treasure trove of knowledge, it can often take probing to get to the point at hand.

Dr. Triplett: “Thank you Mr. Simmons, but we are really here to discuss a specific case.”

Dr. Triplett then directs everyone’s attention to a projector screen with security footage of Joe’s squat. There it was, in all of its glory. Clear as day and obvious as a car fire, Joe was barely even bending his knees during his squats. The crowd gasped. In the distance, a baby started crying.

After glancing at the screen, Louie Simmons reverts his gaze to Joe. Shaking his head, he starts to speak:

Louie Simmons: “I have always said: ‘if you run with the lame, you will develop a limp.’ And you, son, have a serious limp.”

Dr. Triplett: “I have no further questions, thank you, your honor.”

Judge: “It is now time for the defense to question the witness. Does the defense have anything to add?”

Joe: [Visibly shaken by the scolding from Louie Simmons] “No, your honor. No further questions.”

Louie Simmons is then beckoned off the stand and returns to his place in the audience. The judge then calls the defense witness to the stand. Joe’s training partner, Jack Allyoubro, approaches the stand, promises to tell nothing but the truth, and takes his seat.

Judge: “The defense may now examine this witness.”

Joe: “Thank you, your honor. Jack, may you please state your name to the jury and your relevance to this case?”

Jack: “My name is Jack Allyoubro and I am Joe’s training partner. I was with Joe at the gym the night of the alleged incident.”

Joe: “And, Jack, can you please explain to the jury what you witnessed that night?” 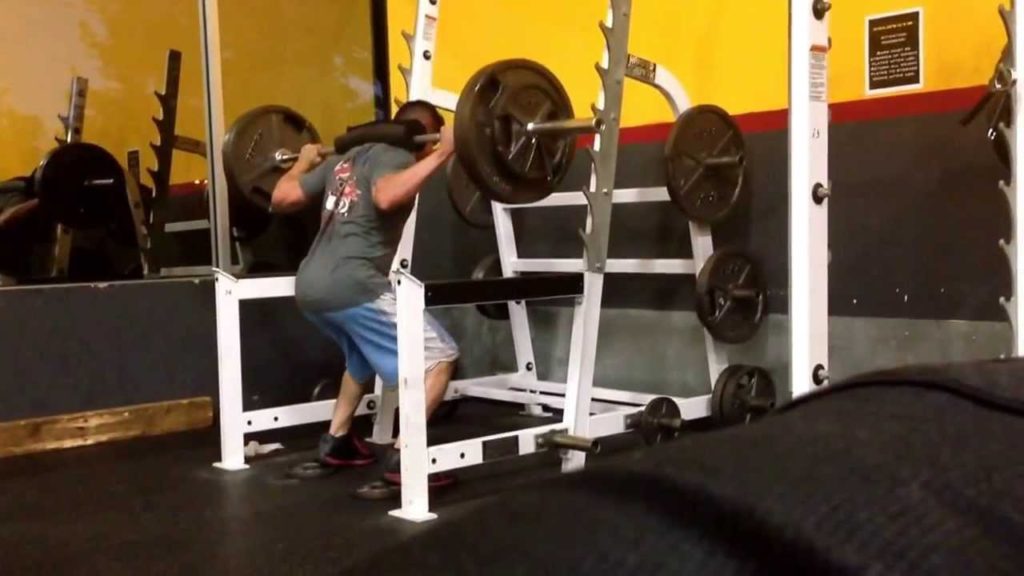 Jack: “Man, we were crushing it that night! I’m pretty sure Joe had 185lbs on the bar, which was a massive PR for him. He squatted lower than I’ve ever seen him squat before. It was incredible. I didn’t even have to touch the weight!”

Joe: “So you’re saying I performed a solid squat that night?”

Joe: “Thank you. Your honor, I have no further questions.”

The judge then looks to Dr. Triplett.

Judge: “Does the prosecution wish to cross-examine this witness?”

Dr. Triplett: “Mr. Allyoubro, you made an interesting statement stating that Mr. Obtuse performed the squat with no assistance from you whatsoever. Is that true?”

Dr. Triplett: “However, the video shows that Mr. Obtuse was wearing an extra wide Valeo belt and knee wraps and was sniffing ammonia caps before this set. You also heavily slapped his back and screamed, ‘light weight!’ before he un-racked the weight. Is that true?”

Jack: “If I may continue, though. That’s all normal stuff for when we hit our hardcore leg sessions. We get after it pretty good. But, like, we don’t take creatine or any other steroids like that.”

Dr. Triplett: “Did you just call creatine a steroid?”

Jack: “Yes, everyone knows creatine is a steroid.”

Murmurs ripple through the audience. Papers are shuffled loudly. Many [illegally] consult Google on their phones to fact-check this statement. How credible was this witness? If he didn’t know the difference between steroids and creatine, how on earth could he judge a squat?

Judge: [Banging his gavel] “Order in the court! Silence!”

Dr. Triplett: “I have no further questions, your honor.” And with a slight smirk, she returns to the prosecution bench.

Both the defense and prosecution perform their closing arguments. Dr. Triplett continues to hammer Joe’s squat from every possible angle while Joe struggles to cite research about regional hypertrophy and how reducing range of motion may impact muscle development. Dr. Triplett reminds the jury that this method should be used as a tool alongside full range of motion movements. Joe’s case is being crushed.

Following the closing arguments, the judge then instructs the jury on the laws that apply to this specific case. He reminds the jury that, if they do decide to convict Joe, they also need to consider the length of his sentence as well. Chronic quarter squatting carries a sentence of 5-10 years of heavy labor and reduced social life in order to correct the crime and ensure the individual is no longer a public menace. After the judge’s explanation, the jury enters the deliberation room.

In less than 5-minutes, the jury reaches a unanimous decision. Jury member, Tom Platz, delivers the verdict to the judge. 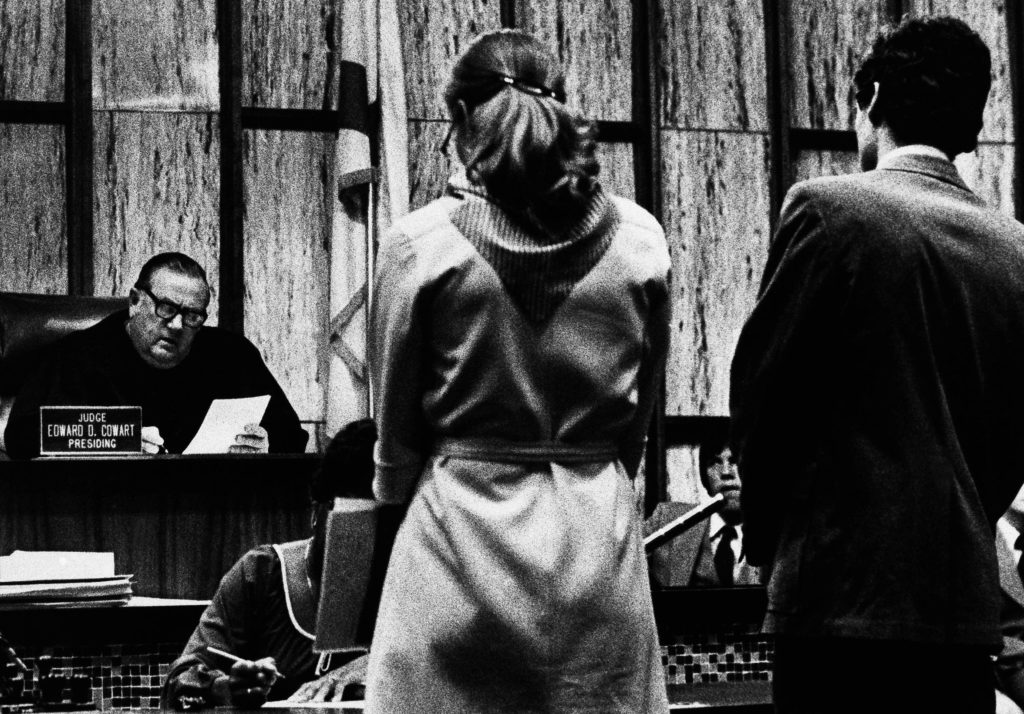 Judge: “May the defendant please rise? Mr. Joe Obtuse, on the charge of chronic quarter squatting you have been found… guilty. The jury has decided that your sentence be no less than 5-years of supervised heavy labor with CT Fletcher. Your diet must consist of high protein, moderate carbohydrate, and moderate fat. You will sleep a minimum of 8-hours per night. And, throughout this experience, you will learn to squat correctly, god help you.”

He continued, “You’re a bright young man. You’d have made a great bodybuilder and I would have loved to see you compete on the Olympia stage someday. But you went another way, partner. I don’t feel any animosity towards you. I want you to know that. Take care of yourself.”

While this piece was certainly meant to be entertaining, I hope many of you also picked up on the subtle symbolism at play. The gym really is a courtroom. The weights and machines have no choice but to abide by the laws of gravity and physics. Therefore, any alteration in training feel, effort, or performance is entirely up to you.

With this in mind, always make sure you’re preparing your case to ensure your innocence in the courtroom of gains. Do your homework. Research as much as you can about training and nutrition. Watch videos of professionals training so that you also understand the importance of effort. Make sure you’re sleeping and hydrating well. Find a good training partner to keep you accountable. Film your lifts to ensure your form and technique is always on point.