3 Reasons Why Your Abs Aren't Fully Developed - The Muscle PhD
Welcome!Sign In
Sign In |   No items in cart.Visit Shop
Skip to content

The easiest measure of your exercise progress as well as your body fat percentage is through checking out your abs. They’re the main muscle group everyone brags about having, and probably why a lot of people take bodybuilding as a passion. They’re also the easiest to join a community about, as there are a lot of planking challenges and crunch guides online that’ll give you bragging rights just by being able to do them.

However, you might be doing your absolute best at the weight room, doing all the “textbook” exercises, only to be left with no abs to speak of and a sore body from all that exercise that left you frustrated.  If you’re looking to maximize your ab growth, take a look at these 3 reasons why your abs might not already look like a Greek sculpture. 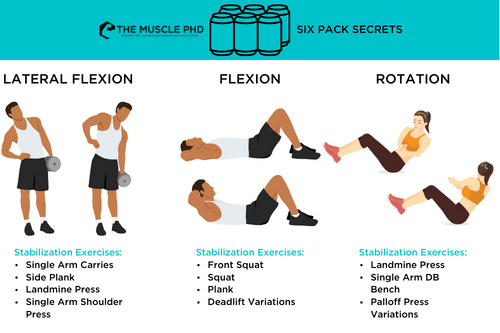 There are a lot of textbook exercises that people use to grow their abs, things like crunches, twisting crunches, maybe even taking a broom and putting it around your head while doing twisting movements. While these techniques can definitely show some improvements, you probably don’t know what really happens when you grow your abs, and why these movements give any of the benefits they promise to.

Everyone knows that the abs flex the spine, twisting the abs will usually cause spinal flexion. Everyone knows crunches and twisting crunches, let’s talk about some of the stuff you might not know. Anytime you capitalize on the stabilization aspect of the abs, you’re going to develop them maximally. You shouldn’t be listening to that one guy that’s against planks, saying that they will never help you grow abs. In fact, movements like planks are going to be very important for bringing out your abs, things like normal planks, or side planks, single arm carries help maximize the stabilization component of abs.

Studies even show that if you’re doing crunches on a more unstable surface, you’ll be able to increase your ab activation, demonstrating that there is indeed a stabilizing component that forces the abs to work harder.

In addition to that, if you’re favoring heavy squat exercises instead of high rep squats, you might be missing out on some of the benefits of high rep squats. They are going to help build up that oblique muscle look and they’ll act a lot like having a weight belt on, stabilizing your spine. So, high rep squats are a great way to fully activate an engaged core, and you need to try high rep squats even if you’re skeptical about their efficacy.

Abs are always primarily built in the kitchen, rather than the weight room. Your diet is going to dial in those abs. Even if you work until you’re blue on the face, every day in the year, doing crunches, situps, hanging leg raises, single arm carries, planks and all the other ab developing exercises.

If you’re not eating the right diet, your body fat probably isn’t super low. Therefore, you’ll never be able to see those abs. Granted, you might be someone that’s genetically gifted with shredded abs all year round. Chances are though, that’s not the case. If you’re looking for a general guideline to help you formulate a diet that’ll help showcase your abs to the world, we recommend lowering your carbohydrates, cycling your calories, and if you’re looking to maximize that fat burn you can do some high intensity cardio. All these techniques are going to help get you leaner. However the most important step is to stick by your diet and do cardio in order to be able to see your abs.

We hope this article helped you understand why your abs aren’t fully developed. By using the techniques mentioned in this article, you’ll be able to maximize your ab exercises in order to dial in those abs!