Compound vs. Isolation Movements - The Muscle PhD
Welcome!Sign In
Sign In |   No items in cart.Visit Shop
Skip to content

There are multiple discussions about how bodybuilders can only target single muscles, and how other sports athletes could use more strength and muscles overall. And a lot of these discussions stem towards the preference to use isolation movements for consistency and targeting a specific muscle, vs using compound movements that have you activating more muscles at the same time. While both of these movements seem to have their benefits and drawbacks, what should you, as a bodybuilder, focus on? Here’s the thing, you should do both! But in context.

If you’re having some trouble visualizing it, think about this: When you’re doing a single arm preacher curl, you’re only targeting your biceps in that exercise, so your biceps are taking on all the load and you’ll be able to train this muscle however you want to. However, say you’re doing a close grip pull up exercise. That would have you working at the shoulder joint and elbow joint. Then you’re training muscles like the biceps, lats, and posterior deltoids. So instead of only recruiting one muscle, there are multiple muscles sharing the load.

Which is Beneficial for Muscle Activation?

We’ve done a lot of studies on isolation vs compound movements. Using electromyography, which are sensors on the muscle, we are able to see just how much muscles are activated in any given movement. We found that when you control for intensity, muscle activation in isolation and compound movements is similar.

So does that mean that you only need to do isolation movements and get rid of all the compound exercises? Absolutely not. While for muscle activation they would both be the same, their benefits and disadvantages actually complement each other.

Two Halves of A Whole Body

Typically, when you’re trying to activate any given muscle, the end goal of your bodybuilding workout is to either grow the muscle or shape it however you want. However, muscle activation isn’t the only requirement for growth. Studies show that when you’re working multiple muscle groups at once, you’re not just activating the muscles, you’re actually creating a large anabolic response in your body. That’s because your body has an endocrine system, and that system is responsible for creating hormones. It shows a stronger reaction to larger muscles being activated than smaller muscles.

So if you’re doing a compound movement such as a bench press, you release more hormones like testosterone, growth hormone or even anabolic hormone. That’s huge, because studies show that the more well-trained you are, the more your muscles will have receptors for testosterone, which is a factor in muscle growth!

Conversely, if you’re doing dumbbell flys or leg extensions, you might see little to no hormone increases when compared to when you were doing a compound movement like a squat. Not to mention that when you have multiple muscle groups sharing the load, you’ll be overall able to lift heavier weights. Heavier loads in turn might help with long-term growth because you’ll have more bandwidth to keep training with heavier and heavier weights.

Not everything’s fine and dandy in the compound movements wonderland, though. One of the biggest drawbacks of lifting heavy using compound movements is that you’ll never be able to do it every day consistently. You can’t deadlift every single day, nor can you squat heavy every day. Not only do they leave you incredibly sore, you might not be able to move that muscle for the next few days. In fact, it might take you 72-96 hours to actually recover after a heavy compound movement day. Not to mention that your nervous system will be centrally fatigued, causing you to feel tired, worn out, and cranky.

That’s where isolation movements shine, as you can do them daily without causing a strain on your nervous system. There’s actually another long term drawback to compound exercises, it’s that you’re not giving all of your muscle groups an equal treatment. Say, for example, you’re doing a military press compound exercise targeting the front deltoids and side deltoids – and only a bit of the load is on the rear deltoids. Eventually you might have a high overpowered front delt and weak rear delts! That’s when you’ll be able to use isolation movements. By isolating a target muscle, you create a better mind-muscle connection with that weak body part.

Ultimately, it’s all about your intent. We recommend watching our “Is the Mind-Muscle Connection Real” video if you’re interested in learning more about the wonders of the mind to muscle connection! The key point here is that you need variety and frequency in your exercises, you shouldn’t just focus on the heavy days when you’re doing super high volumes. Instead why not allow a day with an increased frequency of reps with isolation movements?

We hope you enjoyed learning all about the differences and advantages between compound and isolation movements, we’ll see you next time you have any problems! 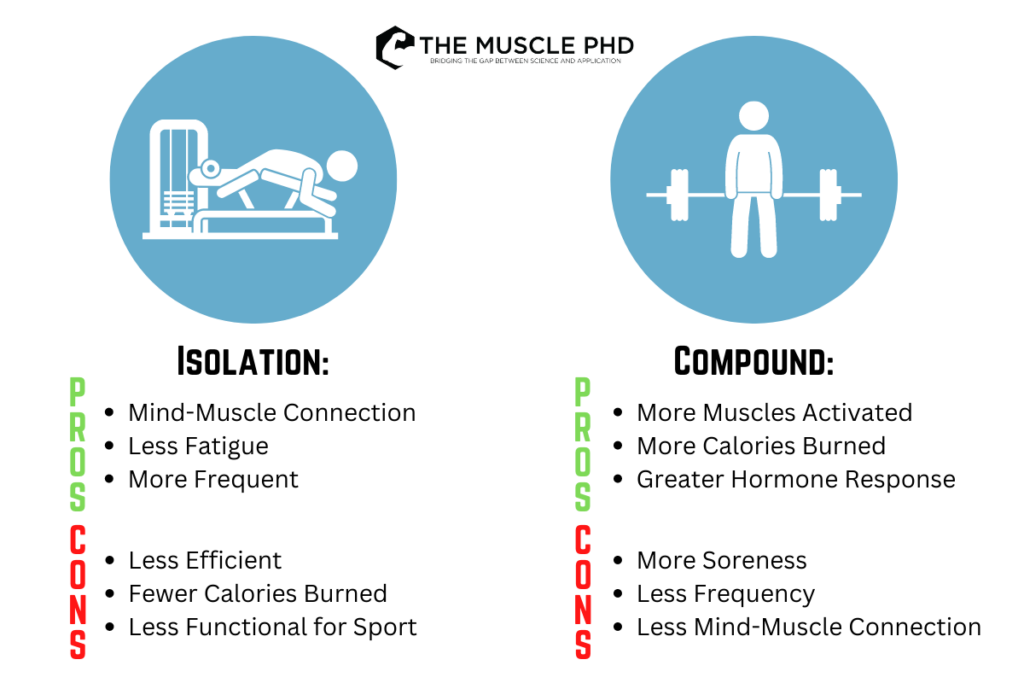