You’ve just participated in your contest and you’re ready to go back to your off season body! Yet, you recall every previous time when you got rid of your contest diet and subsequently gained a huge amount of fat. This time, you’d like your offseason to start off a little smoother. Generally, we say that it’s all about understanding how your body works. It doesn’t have to be such a dilemma.

When you’re dieting down for a contest, even if you’re doing everything the “correct” way, your body inevitably ends up making adaptations. You see, your body doesn’t exactly know what a contest is, and unlike you, it’s a constantly running machine with one purpose in mind: keeping you alive. So, once you reach your desired state of around 5-6% body fat, your body’s actually in a full panic state! If it could speak it’ll probably shout out “We’re gonna die!”

A lot of times people use the term “Metabolic Damage” to explain the state of dieting down for a contest. However, we believe that this term isn’t accurate. Because you’re actually not damaging your body, it’s really your body adapting to the different diet you’re putting it through. So, you’re thinking you need to diet down, lose fat, get shredded, and look ripped on stage! Conversely, your body thinks from a survival standpoint, and it’s actually not happy that you’re stripping it away of all its fat. It’s probably looking at its last resort of catabolizing your muscle tissue and inevitably dying.

What’s the general trend that bodybuilders do post contest? Usually, they’d try doing what’s called a “reverse diet” where they slowly increase their calories bit by bit every day, until they reach their regular offseason calorie state. They’re hoping to maintain their muscle mass and even stop themselves from gaining much fat at all. So, what they end up doing is adding 10-50 calories a day, if they’re consuming 1500 calories while prepping, then they might eventually reach around 3500 calories during their off season. Yet the first thing your body wants to raise is your fat levels!

As long as you’re below your maintenance calories, you’re immediately making more metabolic adaptations, meaning your metabolism gets slower, and you’re prone to store fat. Metabolically speaking, adding muscle tissue is going to raise your metabolism.

Your body doesn’t want metabolically active tissue such as muscle, that would be terrible for survival, so what does it want to raise first? Typically, the first thing that comes back is fat, because it’s not a highly metabolically active tissue, you actually store calories in it, it makes perfect sense from a survival standpoint. So, how can you prevent this? Are you forced to watch the body you’ve worked so hard to sculpt go away? There’s actually a great way to appease your body’s needs AND gain little to no fat in the process! 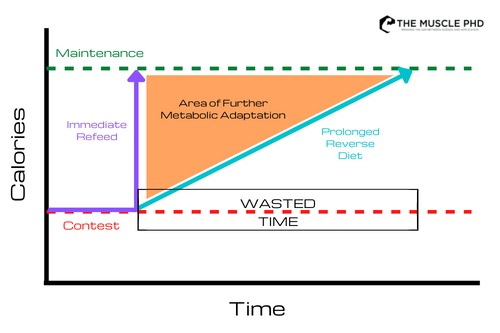 You typically would look at your calories pre contest and your calories during the off season. Your maintenance calories will be somewhere in between those two figures. Now realistically speaking, are you going to be able to maintain your shredded physique throughout the off season? No. However, while you’ll gain a little bit of fat, you’ll prevent further metabolic adaptations from happening.

If you’re scared of gaining 20-30 pounds after your contest, you’d be hard pressed to find an alternative. The problem is that since you’ve been dieting like crazy for 6 months, your body will hold water and gain fat like crazy once you refeed. Since, as mentioned above, you store fat at an accelerated rate, typically around 95% of your weight gain would be fat! It’s impossible not to gain a lot of fat. Or it used to be… What if you made it difficult for your body to do so?

Dr. Jose Antonio actually conducted a study where he found that if you overfeed on protein, it actually becomes super difficult to convert excess calories to fat! Because it takes a lot of energy to do so. If your maintenance calories are somewhere around 2200 or 2500, and you go from 1500 calories, you could go up to your maintenance level purely through protein for the first month after your contest. You’ll actually gain little to no fat while eating steak, chicken, shrimp or eggs!

Why’s that, really? Protein is metabolically active, it stimulates thermogenesis which means the rate at which you’re burning calories is increasing – and you’re creating more heat as a byproduct. Moreover, the process of converting protein to carbohydrate, and then to fat, is far too energetically costly for the body. It’s just not worth the time! Finally, keep in mind that our body is constantly recycling protein – not just muscle but enzymes and other tissues as well! It’s quite unlikely that our highly evolved biological machinery would waste protein by converting it to fat.

A lot of bodybuilders post-contest transition to a ketogenic diet, or a modified Atkins diet. Since coming out of a contest your body would preferentially be storing fat, a ketogenic diet shifts your fuel utilization to preferentially burning fat. Your goal should be to store fat and raise your calories in an extremely low carb fashion.

So, you might end up having anywhere from 55-60% fat in your daily diet, with 40% protein and only 5% carbohydrates. Once you stop gaining fat, back your volume off by 60 to 75%, and now you can allow your body to recover.

We hope you’re able to accurately prevent your body from gaining fat post contest! We’re looking forward to seeing you the next time you have any questions.